Would you like to be in a book club that had guests such as Stephen King, Dave Barry, and J.A. Jance? The club at Starbucks headquarters in Seattle has managed to land these popular authors among many others. As a long time partner at the office my wife has managed to hear some great stories from these authors and their struggles on the writing journey.

One of the more interesting tales was shared by New York Times bestselling author, Lisa Scottoline. Five years into her law career Lisa had a baby girl and was divorced by her husband. Rather than going back to practicing law she dove into the career of—mystery writer.

Determined to make it on her own, Lisa refused to accept support from her ex-husband. For years she pursued her dream of becoming a writer while subsisting on credit cards and savings.

During this period she did on occasion like to take her growing daughter, Francesca, out to dinner. But this was in the days when fast food places didn’t accept credit cards. Because of this her child had never experienced the favorite restaurant of many American kids—McDonalds.

Finally the day arrived when Lisa, with no publishing contract to show for her efforts and at her self-imposed debt limit, had to resort to a day job. She returned to the legal profession as a clerk for the Third Circuit U.S. Court of Appeals. Then a month later she sold her first book, Everywhere that Mary Went.

One advantage to drawing a paycheck and having a book contract was that she had actual greenbacks to take her daughter to experience the golden arches like most American kids. As they stood in line during their first visit Lisa pointed out the items on the board above the cash registers to Francesca. The little girl, who had previously only made her choices from a menu in a sit down restaurant, asked in a high, loud voice that carried across the lobby, “Where are the appetizers?”

Lisa reported that a number of fellow patrons gave her a what-kind-of-spoiled-princess- are-you-raising look.

We all suffer for our art in different ways. 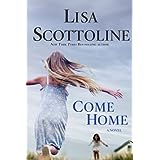 *In the above photo of Stephen King, my wife can be seen in the background “hanging” with Stephen.